“That barn isn’t big enough for us, our dates and our poufy dresses.” – Spencer to Veronica “You’ll open a window.” – Veronica to Spencer

The episode opens with the girls’ parents explaining to them that they cannot go to prom.  Veronica offers to host a prom in the barn.  They are not welcome at commencement either.  Spencer says the barn isn’t big enough for them and their dresses.  Veronica says Spencer will have to open a window then.

Ali and the girls are having coffee in The Brew.  Ali says who would they hang out with besides each other if they went to the real prom.  It’s true, they don’t have any other friends.  Aria has been ignoring Clark’s messages.  Lorenzo comes in and ignores all of them.  Emily thinks he will forgive Ali.  Ali gets a text from Charles that says, “Better be at prom.  It’s our last chance to dance.  Come alone.  xo Charles.”

Later, Ezra tells Aria that the police should talk to Clark if he is connected to A.  Aria said she made the mistake of thinking a lot of people were connected to A, including Andrew.  Who hasn’t in a town with this many suspicious people?  Ella comes in and tells Aria that she won the photo contest, which includes a trip to LA.  Aria thinks Charles may be waiting for her at the baggage claim or installing a lethal disco ball in Spencer’s barn.  Ezra offers to come to the barn prom.

Caleb is going to New York and he will miss prom.

Em invites Sara to prom, but Sara is going to prom with Claire.

Spencer tries to stop Toby from going into the police station.  He is about to be suspended and Spencer wants to cover for him.  Lorenzo comes out of the station.  He has been suspended indefinitely.  Lorenzo says they’re not interested in anything Spencer has to say.  Ouch.

Ashley wants to know why Caleb isn’t coming to prom and thinks the girls should make the most of it.  Hanna thinks Caleb is hunting A down.

Ali gets a call from Charles.  She says she cannot go to prom and hangs up.  Charles is watching her through the window.

Lorenzo meets with Spence at The Brew.  He says he heard that Ali was a master manipulator.  Spencer says that Ali has changed.  Lorenzo says he doesn’t see the good in her anymore and cannot forgive her yet.  Ouch.  Spencer still invites him to the barn prom.

All the girls’ mothers have gathered in the Hastings’ kitchen, where they have better snacks than the girls.  Veronica offers them all wine.  It is lightning and thundering as Ali sneaks off to the real prom.  She waves at Pam and it reminiscent of her waving to her mom the night she disappeared.  A follows Ali. 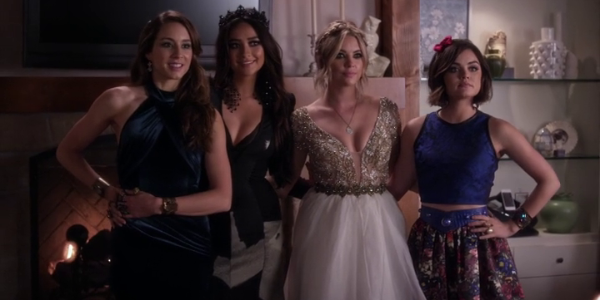 At the barn prom, Hanna asks Toby if he can call in a favor.  He can’t since he turned in his badge.

The moms are on the porch talking about the lies the DiLaurentis family has told.  Veronica slips and says Jason didn’t know he wasn’t Kenneth’s son.

Aria sees on Ezra’s phone that he is going to LA.
Aria asks about Ali and Em thinks she is waiting to make an entrance.  Ali arrives at the real prom and Clark spots her.  The girls are looking at pictures of the real prom on social media.  Lucas took Jenna to the prom.  Em spots Ali in a picture.  Spencer says Ali is hoping to meet Charles.

Veronica tells the other moms about Peter’s affair with Jessica.

The girls, Toby and Ezra arrive at the real prom to look for Ali.  Aria tells Clark her friends saw him.  A teacher interrupts and says Aria and her friends need to leave.

Ali gets a text from Charles.

Pam thinks that everything cannot be pinned on Charles and I think that is a clue for the remaining episodes of the show.  Veronica says they should ask Kenneth for answers and goes over there.  I should note Veronica is drunk.

The girls confront Ali and she says she knows what she is doing.  Sara shows up.

The moms go over to the DiLaurentis house.  The door is open, so they all go in.  Pam spots an evidence envelope.  It is a picture of Mrs. D, Ali and the boys.  Rhys then shows up.

Spencer tries to stop Ali.  Ali says Spencer never liked her, so she can’t understand her need to talk to Charles.

Caleb shows up at prom and says Hanna should dance with him.

Rhys asks if Kenneth is there and if any of them are related to the DiLaurentis.  Ella thinks they just met Charles.

Somehow, Aria & Ezra, Spencer & Toby, Sara & Em and Hanna & Caleb end up dancing.  It looks ridiculous considering their situation with Charles.  Who stops in the middle of danger like, “Baby, let’s slow dance.”

Aria says she doesn’t want Ezra to come with her to LA.  He is actually going to LA on his way to Thailand for Habitat for Humanity.  Aria tells him he needs to move on.

Spencer wrote her graduation speech about Toby.  While they are distracted slow dancing and crap, they lose Ali.

Pam thinks they should tell the police about Rhys possibly being Charles.  They hear a noise in the basement and go down there.  They get locked in.

Caleb got a job in New York, so that he and Hanna can move there together.

Ella thinks Charles locked them in the basement.  No one has a phone and the lights go out.

Charles sends Ali another text and she follows him to an isolated place.  Clark tries to follow the girls, but is stopped by Caleb and Ezra.  Toby takes out his gun, which he shouldn’t have since he turned in his badge.  Clark is actually a police officer.

Charles puts his hand over Ali’s mouth and drags her away.

Lorenzo shows up at the prom.

The moms try to send Ashley up something in the basement, since she is the skinny one.  There is no way out that they can find.  Isn’t there a crawl space or something they can get out of?  Remember that?  The writers don’t.  The moms wonder about the girls and regret not keeping them safe.

Ali is led out of the prom by Charles.  She asks Charles to take off his mask and when he does, she says, “Oh my God.”

Another episode of build up to the finale.  I think trying to have moments with all the couples was forced, but I enjoyed the moms interacting.  That should happen again.