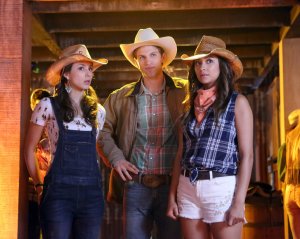 The cheekily titled “Bring the Hoe Down” begins with Aria, Emily and Spencer eating lunch at school, or at least they have food in front of them. They talk about the person living in the crawl space and Spencer says only a reptile would do that, but CeCe is reptile-like. I agree. I’ve been calling CeCe a snake for months. Emily inquires how she is supposed to live in the house with the peepholes in the floor. Aria and Spencer are unhelpful as they tell her to stay on the second floor and always wear underwear. I don’t know why Emily can’t stay with one of them. Aria and Spencer are both perpetually home alone.

Hanna arrives and asks Spencer to talk to Veronica on Ashley’s behalf. Tanner arrives, supposedly to update Emily on the car in her house situation. Tanner says they still don’t know who the driver is, but tells them about the muddy shoe found in the wreckage. She says that they will test it for DNA. Hanna runs to puke in the bathroom. I’m feeling a little nauseous too, wrap this up already.

Spencer says that A’s plan to frame Ashley has been ruined. Spencer wants to search the crawl space and needs Hanna to distract Mrs. D by taking her shopping. The other girls walk away and Hanna sees a weird guy staring at her.

Paige is still holding on and asks Emily if they are still on for the dance. Emily doesn’t answer. Paige reads the recommendation letter from Zoe and says that Zoe is into Emily. Jealous much?

Jake waits for Aria outside of school. I am undecided if this sweet or stalker behavior. I don’t know. This show has made less trusting than I already am. Anyway, Jake offers her a ride home, but she drove to school. He tries to hook Ashley up with a lawyer he knows, but Aria says Ashley already has a lawyer. He looks rejected (because she did reject him), so she invites him to the hoedown.

Emily goes to see Ezra and asks if he is growing a beard. I remember reading a long time ago that a person that is normally clean shaven suddenly looking stubbly is a sign of mental instability. Read into that all that you want to. Ezra tells Emily about losing Malcolm and asks Emily not to tell. Of course, she is going to tell Aria before the day is over.

Hanna and Caleb talk in the hallway at school. Ashley asked that Caleb take Hanna to the hoedown, even though Hanna doesn’t want to go. Hanna finds an envelope full of cash in her locker with a note that says, “Maybe this will help your mother.” Definitely not a note from A.

Spencer tries to talk to Toby about CeCe possibly giving Hanna the money. I don’t believe that for a moment and neither does Toby. They get into Spencer’s truck and a CD of his mom singing begins to play. Spencer tells him to take the CD out and there is a note from A stuck to it that says, “There’s more where this came from.” Spencer doesn’t trust A, but Toby wants to contact Dr. Palmer to see if he has more recordings.

In the crawl space, Emily tells Aria that she should talk to Ezra. Emily finds a button. Spencer startles them and then sarcastically replies, “Hi, I’m Spencer and I’m coming into the crawl space.” Thanks for the giggle, Spencer.

The girls hear someone upstairs and Aria looks through one of the peepholes. Someone sticks knitting needles through the holes and nearly has Aria wearing a bedazzled eye patch. Later in Spencer’s kitchen, Emily says she wants to move in with Spencer. The girls are suspicious of Spencer’s distant behavior and Hanna asks if Spencer is pregnant. Emily tells her to shut up. Hanna says that they’ve all had boyfriends, even Emily. Emily tells her to shut up again. LOL. Spencer tells them about Toby’s mom. I’m surprised she kept the secret this long.

Toby tries to talk to Dr. Palmer, but the staff won’t let him. He gets a picture of a car from a blocked number.

Ezra tries to talk to Aria at The Brew when Jake shows up. Awkward! Jake bought Aria a pair of cowboy boots and Aria asks how he knows her size. This is another one of those sweet / creepy moments. He slips the boot on her and rubs her calf. He asks her how it feels and she says people are staring at them. He says he is talking about the shoe and she says perfect.

Emily is packing her belongings when she receives a text from Paige, which she ignores. Emily sees a bottle of blue nail polish and has a flashback. Ali tells Emily to break up with Ben, as Ali paints Emily’s toenails. Ali says that Emily shouldn’t end up with “mushy squash,” which is what’s left on the buffet table after everyone has had their pick. She tells Emily that she needs to make decisions, but Emily doesn’t want to hurt Ben. Ali tells her to be careful of what you’re good at or you’ll spend the rest of your life doing it. She offers to break up with Ben on behalf of Emily. Ali tells a story of breaking up with a scary guy on behalf of a friend. The guy pulled a gun on her and Ali says that he used to go to their school. Wilden? Garrett? Spencer and Emily think the girl was CeCe and the guy was Wilden.

CeCe is shown in the lair, part 2, which is covered with pictures of Ali and the girls. She tells a person on the phone that she is not coming back to Rosewood.

At hoedown, I am distracted by Hanna’s unflattering dress. The weird guy from school asks her to dance. He says he put the money in her locker and he knows her mom is innocent. The guy, Travis, was at the lake the night Wilden was killed. Wilden called a tow truck to pull his car out the lake and Travis’ family owns a tow truck. Travis heard the gun shots after Ashley left and saw a blonde girl running through the woods. Travis doesn’t want his dad to get in trouble and says the money showed up in his truck, which he left at the lake.

Emily arrives at the dance with Toby and Spencer. Emily sees Paige talking to another girl. Someone moves on fast.

Hanna tries to get Travis to talk to the police and he says he did all he is going to do. Caleb tells Hanna that Travis might be working for A.

Aria and Jake dance and Ezra stares at them, like the creeper he is. After the song is over, Jake tells Ezra to back off. I know which one of them would win in a fight.

Toby receives a text with the address where Palmer’s car is parked. Spencer tries to talk him out of going there, but he accuses Spencer of trying to shut him down. Spencer admits that she told the girls about Toby’s mom. Toby says that Spencer choose the girls over him and leaves. Spencer asks Caleb to follow Toby, while she takes a giant plate of food to Hanna.

Hanna follows Travis to his family’s gas station. She tries to give the money back to him and get him to do the right thing.

Emily tells Spencer she saw Red Coat. They spot her and follow her outside. Spencer and Emily try to steal a truck, but Spencer can’t get it into first gear. Red Coat climbs into the back of the truck, under the hay. Spencer sends a SOS text to Aria and asks her to bring Jake with her. In case anyone wondered what his purpose was, it is good to have a muscled man around sometimes. They get out of the truck and Emily grabs and tool and violently hits the hay. They only find a red coat in there.

Caleb finds Toby and tries to stop him. The police pull up with sirens up and Toby and Caleb run away.

Random stuff. Travis tells Tanner that Ashley wasn’t there. Red Coat was missing a button. Emily says she doesn’t want mushy squash and dances with Paige. Aria goes to Ezra apartment to talk to him.

Then, a bombshell happens: a blonde in a red coat listens at Ezra’s door. It’s CeCe! I guess she will come back to Rosewood.

The final scene shows Red Coat knitting an outfit for a doll. Dolls of all the girls are shown, including a Mona doll wearing a black hoodie. I guess Mona is still on the A team.

I am so excited for the finale. If it is all that the cast and crew said it is, it will be awesome.